This article is authored by City Planner Robyn Keefe.

A revolution is happening, all over the world, in almost every field of knowledge and application.  Elementary school students write their own classroom constitutions and help shape their own curriculums, workers write and vote on their own company bylaws, internet users pool their knowledge in open source encyclopedias, and city residents grow their own food instead of buying it in grocery stores.  Urban planning is no different, with a new generation of participatory city planners challenging traditional top down rational decision-making models, instead encouraging and relying on citizens to help “code” their cities.  The challenge is always is – how do we do it?  The moment I learned about the Open Partnership Education Network (OPEN) Wiki Platform, I knew I had struck gold.

As a new hire at the City of St. Petersburg, Florida, I had only been on the job one month when I found myself at the Tampa Bay Food Roundtable, a meeting of the minds for thought leaders, University of Florida Institute of Food and Agricultural Sciences (IFAS) Extension directors and agents, growers, planners, lawyers, journalists and academics, all concerned with the development of a sustainable food systems future.  Frantically scribbling an encyclopedia of notes, I had only a vague idea of where my work was headed.  Derek Kilborn, Planning Manager for the Urban Planning and Historic Preservation Division at the City of St. Petersburg and my boss, had assigned me to take over the division’s urban agriculture initiative, which included updating the City’s Land Development Regulations (LDRs) to be more permissive and specific to a range of urban agricultural land uses.  The proposed ordinance and barriers to “urban ag” in the City LDRs were a frequent topics of discussion at the Roundtable, with many attendees asking me where St. Petersburg was in that process and when stakeholders would be involved.  It was determined that addressing regulatory barriers at all levels of government was a key step to the larger goal of a food secure Tampa Bay.

Enabling growth of the local urban agriculture movement through more permissive LDRs has been a long and rocky road for the City of St. Petersburg.  Though urban agriculture has been a part of cities for centuries and has often been promoted as a key strategy for dealing with economic insecurity and inner city decline, the increasing availability of city markets and trend towards industrialized large-scale rural farming encouraged many professional planners in the mid- to late 20th century to view agriculture, especially intensive agriculture such as animal production and meat production, as a rural activity, relegating the use to city outskirts in the name of public health.  St. Petersburg was no exception, only first explicitly allowing community gardens by annual permit in 2009 and commercial indoor agricultural uses (a hydroponic farm housed in shipping containers, for example) by Special Exception in industrial zoning districts in 2011.  In mid 2013, representatives from several community organizations requested that the City respond to growing demand by amending its plans and regulations to support development of urban agriculture in the community.  By the end of 2014, City staff had produced two ordinance drafts in response, a short-term ordinance and a long-term ordinance.  The short-term ordinance updated language in sections already incorporated into the Code, and the long-term ordinance laid out an entirely new framework.  The short-term ordinance was approved that year, but the long-term ordinance eventually stalled due to obstacles encountered at the County and State level.  New on the scene and with virtually no background in agriculture or even local government, I was picking up where a previous planner had left off, charged with navigating us past these obstacles.  I knew I couldn’t do it alone, but I didn’t quite know where to begin. 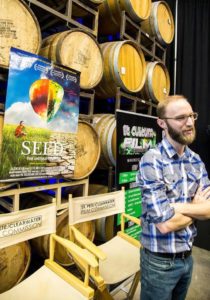 Just a couple weeks later, I was invited to a SEEDs gathering, a group of urban ag collaborators developing workshop sessions for Et Cultura, an interactive festival intended to function like City of Austin’s South by Southwest.  First up to present, Walter Balser, Founding Director of OPEN, took us behind the scenes into the world of the OPEN Wiki, an online collaborative platform in pre-beta where participants could share ideas, add or edit content, upload media/documents/etc., and have a dialogue about a specific topic or theme related issues.  Encouraging cross-collaboration around the specific SEEDS Theme for Et Cultura was the intent of this demonstration, but I immediately saw the potential applications for City Planning.  Light bulbs going off, I practically skipped into my manager’s office and proposed posting the 2014 proposed draft ordinance for urban agriculture to the OPEN Wiki.  Understandably, given my newness to the organization and the unfamiliar platform, Derek had some concerns and the idea was tabled.  Later on, he would laugh and tell people how he used to be the young professional pushing all the latest technologies, now he was the cautious manager with the online innovator baton being passed on to his younger staff.

After many months, urban agriculture was finally starting to heat up again at the City as staff at the county land use agency, Forward Pinellas, invited me to speak on the City’s experiences with urban agriculture to the Planners Advisory Committee, made up of planning representatives from Pinellas County’s 24 municipalities and unincorporated area.  Upon hearing the news, stakeholders in the urban agriculture community began to pound me with questions about the proposed ordinance: When would it be reviewed?  What was being proposed?  What was the City doing to encourage urban agriculture businesses?  Those that had worked with City staff in 2013-2014 hadn’t had an update on the ordinance since the staff change, and those that had not been involved only knew what the City was NOT doing rather than what it WAS doing for urban agriculture.  I knew we needed to open up the channels of communication if there was to be any trust at all in the work.  Once again, I proposed the Wiki project to Derek – this time he said YES.

I knew we needed to open up the channels of communication if there was to be any trust at all in the work.

Now that I had the greenlight, the realities of the project began to hit:

Most of these issues were largely resolved by supplying as much information as possible to stakeholders right off the bat.  Thus, my first step prior to even touching the Wiki Project was to call for an Urban Agriculture Stakeholder meeting, inviting networks upon networks of stakeholders from various mailing lists and social media pages.  The purpose of the meeting would be to provide an overview of the land use process, the history of the proposed urban agriculture ordinance, its general framework, a short introduction to OPEN and an overview of how to use the Wiki Project to provide input.  20 stakeholders showed up, with half staying just over three hours to watch the presentation and talk with staff.  This meeting accomplished several things:

In structuring the actual Draft Ordinance Review portion of the project, I was extremely conscious of the fact that an average stakeholder does not read city code legalese on a regular basis.  Derek had the solution to this problem – annotate the code language with a summary and explanation.  I ran with it, going one step further and providing illustrations.

The final project was adaptable to an array of learning styles, knowledge areas and user comfort levels by OPEN Wiki provided an opportunity to give more context history and resources to a knowledgeable group of citizens, allies, leaders. having a number of interactive layers.  For users that simply wanted an overview of the project and to have some general input into urban agriculture in St. Petersburg, a comment section was available both at the bottom of the home page and on its own page for general comments (at close of project, almost all general comments were found on the home page with only one input on the specific general comment page).

For users that wanted input into the actual ordinance language, but had very little knowledge about the City Code, a user friendly, annotated version of the ordinance where users could make general comments per section or on the ordinance as a whole (at the bottom of the page) was provided on the Draft Ordinance Review page.

Super users were given access to a Google Doc, where comments could be made line-by-line or word-by-word (at close of project, no one had used this feature).  Finally, a depository of answers to Frequently Asked Questions was provided, also including links to conversations by topic so that newer users could join older conversations based on interest.  Throughout the project, Staff was available to reply to comments (after notification in email), add questions and answers to the FAQ page, and otherwise interact with stakeholders.

Was the project a success?  All in all, participation was better than anticipated for a pilot project.  A  total of nine stakeholders contributed to the Wiki Project over one month, several with extensive in-depth feedback based on their experience as growers or as experts on the latest research.  An estimated 50 – 70 hours of staff time was spent developing the Wiki Project, preparing for the presentation and responding to stakeholders.  In considering return on investment, I would compare this Wiki project to solar installation.  Initially there is a larger upfront investment, but you save money over time.  Now that the

Wiki project has been built we a) have a virtual space for thought leaders for all future conversations on the proposed urban agriculture ordinance, and b) have a template for stakeholder engagement around any other ongoing City initiatives (e.g. the City’s proposed Noise Ordinance).  While it is important to recognize the project’s limitations, namely that not every member of the public owns a computer or has the capability to participate on a complex or unfamiliar web platform, the potential applications, in conjunction with traditional forms of public engagement, are endless.

Imagine having a meeting for a certain topic that never ends.

Imagine having a meeting for a certain topic that never ends.  People come and go at their leisure, but all documents/pictures/videos/presentations, etc. brought in are left there for others to review, and anything said is recorded.  You don’t have to check back, because anytime anything changes, you are notified.  If someone takes your document, you can simply go back in time to the time and date the document existed in the room and retrieve it.  Importantly, introverts have as much input into the project as the extroverts (a battle I have fought all my life).  Transportation is not an issue, you are teleported to the room with a single click.  As a City Planner, you can put all the relevant information about your project up on a wall, as you would at any public meeting, and leave it indefinitely for the public to peruse and comment on, being ready to answer questions or talk about an aspect of the project with them at the click of a button, with anyone in the community having access to the conversation.  Has the code finally been cracked for truly open government?  Only time will tell.

OPEN Program emerges from the University...

Following a period of partnership growth, transition, and hibernation due to COVID-19, the Open Partnership Education Network (OPEN) will em...