This story was originally published on the USFSP blog.

(March 9, 2018) –Lynn Pippenger Hall auditorium was packed to capacity on March 1, for a hot topic community discussion called Bitcoin, Blockchain and the Future of Finance. Hosted by the Kate Tiedemann College of Business (KTCOB) and the Open Partnership Education Network (OPEN), and sponsored by the Aresty Family Foundation and Duke Energy, the highly anticipated event drew a wide spectrum of people wanting to learn more about cryptocurrency and its future.

“We are at a point of a financial revolution. We are creating a better system for financial freedom around the world,” said Charlie Shrem, Bitcoin pioneer and Aresty keynote speaker for the event. Shrem, who launched one of the first Bitcoin trading exchanges in 2011, called BitInstant, shared his personal story with the crowd while exploring the basics of bitcoin and other cryptocurrencies.

Bitcoin is the first decentralized digital currency and worldwide payment system. It is a peer-to-peer network that works without a central bank or single administrator. “The whole point of Bitcoin is that you don’t have to trust a centralized party or system. The system itself maintains its integrity,” said Shrem. 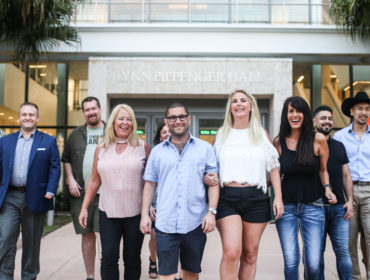 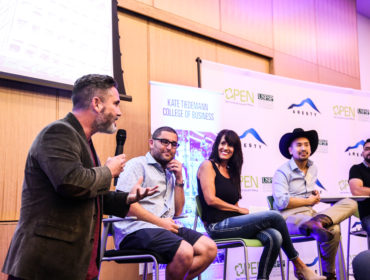 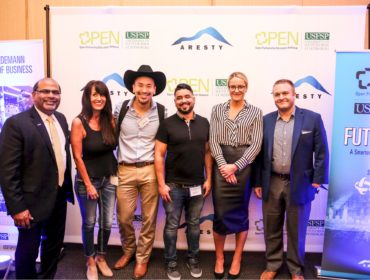 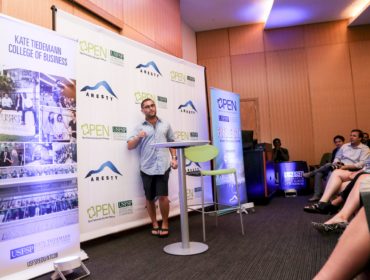 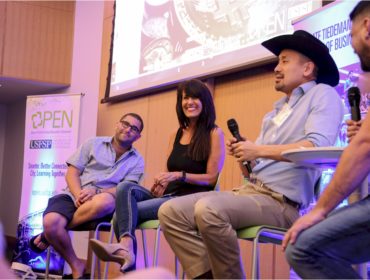 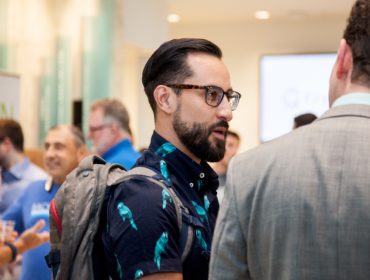 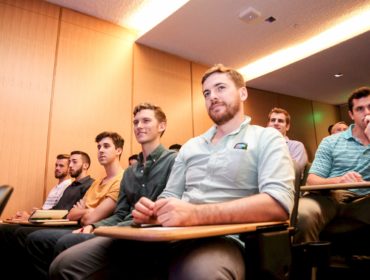 A blockchain is a decentralized database that records transactions between two parties in a verifiable and permanent way. Think of it as a chain of computers, which verify micro-transactions that all must be approved before the full transaction can go through. This process is secured using cryptography that makes it resistant to data modification.

“This is a major movement, and everyone here is part of the epicenter of the Bitcoin community,” said Dr. Walter Fernando Balser, founding director of OPEN, a partnership that operates out of USF St. Petersburg and strives to create a “smarter, better-connected city learning together. “The fact that Charlie Shrem is with us, is indicative of just how many pioneers we have right here in Tampa Bay.”

Balser added, “This is a disruptive technology, not just in currency and finance, but in everything”

The Bitcoin discussion around where cryptocurrencies came from and why it is important today, along with understanding how blockchain technology works, speaks to the KTCOB mission to educate the college community and public on financial literacy and emerging topics in business.

“We have made a commitment to make sure we are an educational resource to the community,” said Sridhar Sundaram, Dean of the KTCOB. “When my boss came to me and said, ‘I invested in bitcoin,’ I said, ‘I better do something about this.’”  Shrem stressed that Bitcoin is a system that allows users freedom without having to trust a government or corporation, alleviating concerns of corruption or bribery.

“You just have to trust the system itself,” Shrem said. “What gives the bitcoin value is simply supply and demand – people are willing to buy and sell it. When you have a free market that is not manipulated, it is a lot fairer.”

The discussion included a Q&A session with a panel of other big names in cryptocurrency technology. Answering audience questions – from what the best cryptocurrency is to invest in to why bitcoin is so volatile – were Rosa Shores and Gabe Higgins, co-founders of Blockspaces, a collaborative incubator workspace located in Tampa and dedicated to cryptocurrency and blockchain technology educators, innovators and startups. Joining them was Jimmy Song, a Bitcoin developer, who teaches developer courses for Blockspaces.

The panelists said that though bitcoin is volatile on the market, volatility is a good thing. Stability is a phenomenon created by artificial means and centralized control and bitcoin technology is free from this control. Song explained that cryptocurrency is technologically resilient because developers can react and strengthen the network anytime vulnerabilities are found. Song summed up the buzz around cryptocurrency by stating that Bitcoin is the greatest technology invented to-date, even greater than the invention of the printing press.

“The development of Bitcoin is going to create a wealth-transfer that we haven’t seen in a couple hundred years,” Song said. “We will be able to spread information in ways we could not have dreamed of before.”

OPEN Invites Thought Leaders to Envision a Season of Enlightenment

Open Partnership Education Network and Aresty Family, in collaboration with WUSF Public Media, The Poynter Institute and the The Community...